Waking up every hour? Fighting to get them to sleep? Waking up MEGA early?

Your little may be overtired! You have probably heard this term before but let’s break down what it actually means and what is happening to make sleep so tough.

Cortisol is a stress response hormone that is sometimes released when we become very tired to help us remain alert. Ever had a “second wind”? That is your brain releasing cortisol, fabulous when you are on a night out and it’s only 8:30 and you’re starting to flag…not so great when you are actually trying to sleep.

When we have a surge in cortisol it can counteract any melatonin (the sleepy hormone) we have been producing and makes it physically more difficult to fall asleep. It’s frustrating enough for us as adults to be in this situation knowing full well why we can’t sleep and still desperately trying to achieve it. But for our little ones who don’t know what is happening and want to sleep but just can’t, it can be infuriating and very stressful for them, meaning their cortisol levels are likely to get higher and higher.

The rise in cortisol levels can also prevent them from going into the deeper aspect of our sleep cycle meaning they are much more likely to wake after a short period of time.

Cortisol does have many great benefits though, one being that is the hormone that helps to wake us up gradually in the morning. However, having a higher baseline cortisol level means that as soon as our brains start to release cortisol to wake us up, we will wake up earlier than normal due to the already present cortisol levels.

So, how can we stop this?

First of all, prevention is better than cure, so learn your little ones tired cues. Once you spot these signs start preparing your little one for bed or for a nap with their usual routine.

Early signs of being tired may be;

Some babies give us lovely big early signs that they are tired, while others can seem like they are perfectly fine until they start screaming like a banshee. Some late signs of being tired and needing to go to sleep ASAP are;

If you think your little might be overtired but you are not sure, these are really helpful signs to look out for;

At this point it’s important to get your little one to sleep whatever means necessary. So if it means rocking them for 40 minutes while signing “Sweet Home Alabama” and stroking their hair in a rhythmical fashion then so be it! The quicker you can get them off to sleep the better.

However, if you are at the stage where your little one is waking up every hour and then waking very early in the morning, resisting naps and then only napping for a short period of time then they may be stuck in the chronically overtired vicious cycle.

To overcome this try following these simple steps;

If you have tried all these things or simply want to talk through your little ones current sleep situation then click here to book your FREE 15 minute phone consultation.

Why do we recommend a white noise machine? Many people including babies find this sound calming, allowing them to fall and stay asleep longer. 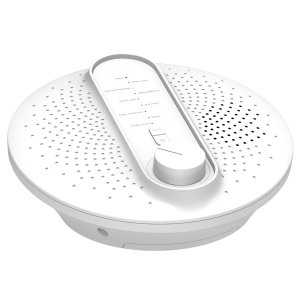